On Sunday, Feb. 25, at their annual convention in San Diego, California Democrats approved a set of positions on opening legislation that include opposition to S 720/HR 1697, the Israel Anti-Boycott Act, a federal bill that would impose draconian penalties for boycotts regarding Israel under certain circumstances; and S 170/HR 2856, the Combatting BDS Act, which purports to permit an encourages states to enact similar laws – as many have.

ACLU, among others, has sounded the alarm about such laws, saying they are unconditional because they seek to “punish individuals for no reason other than their political beliefs.” The Anti-Boycott Act could impose fines of up to $1million and 20 years in prison against any U.S. individuals or entities that support, or whose actions “have the effect of furthering or supporting,” a boycott of Israel or its illegal settlements called for by “international governmental organizations” such as the United Nations or European Union.

In the first judicial test of such laws, brought by ACLU, a federal court last month blocked enforcement of Kansas’ anti-boycott statute after a teacher was denied a state contract when she observed her church’s decision to boycott from illegal Israeli settlements in the West Bank. In a detailed decision, the judge explained that it is clearly illegal for government to force someone to waive a constitutional right (here, the right to compete for a contract).

In a parallel move, California Democrats Sunday approved a platform that excised a section from the Platform Committee’s first draft that would have had them “join the national Democratic Party in opposing any efforts to delegitimize Israel, including the United Nations or through the Boycott, Divestment, and Sanctions Movement.”

“We hope and believe that with the Kansas ruling and now our state party’s opposition to such unconstitutional laws and removal of th platform clause, the tide is starting to turn against his concerted effort to stigmatize and suppress a form of nonviolent protest against Israeli government policies that is taking hold around the country,” said Iyad Afalqa, chair of the Arab American Caucus.

The party also approved a recommendation from the Legislation Committee to support HR 4391, the Promoting Human Rights by Ending Israeli Military Detention of Palestinian Children Act, introduced recently by Rep. Betty McCollum, D-Minn., that would prevent the use of U.S. tax dollars for the Israeli military’s ongoing detention and mistreatment of Palestinian children. Its 21 co-sponsors today include four California Democrats.

Sections regarding Israel-Palestine were the most contentious to come up during the five-hour Platform Committee hearing Feb. 23, said David L. Mandel, lead sponsor of an entire alternative plank on “World Peace and iNternational Relations” submitted with backing from leaders of the party’s Progressive, Arab American, and Veterans caucuses. On another section, he said, “we couldn’t get the committee to oppose Trump’s moving the U.S. Embassy to Jerusalem, but it added support for a possible capital in East Jerusalem for a Palestinian state.” 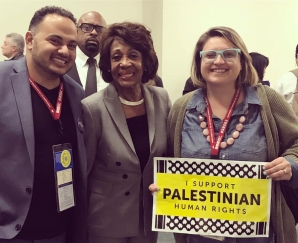 The Jerusalem clause and other wording that remains left the amendments’ proponents less than fully satisfied, said Progressive Caucus chair Karen Bernal. “But we’re not going away,” she added. “The state party is becoming more progressive on many levels, and it’s time to adopt a human rights/international law-based approach supporting equality for Palestinians and Israeli Jews, no matter what political solution is eventually worked out.”

At its previous convention in May 2017, the state party adopted a resolution that did exactly that, the activists noted.

Other items adopted from the progressives’ proposed international plank included a demand to “end support for indiscriminate bombing of civilians in Yemen;” “oppose the use of military drones for ‘targeted killings’ in countries with which the United States is not at war;” “oppose regime change strategies as a pretext for war and occupation;” and support for the recently concluded United national Treaty Prohibiting Nuclear Weapons, which the United States has not signed. The full platform as approved is available here.

Rep. Mark Takano with delegates and members of the Arab American and Progressive caucuses