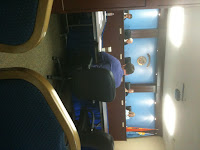 A watered-down statement was adopted at a second Villa Park “special meeting” in regards to Councilwoman Deborah Pauly’s statements at a banquet benefiting the Islamic Circle of North America in Yorba Linda.
Pauly called local Muslims “terrorists” and said she knew “quite a few Marines who would be very happy to help these terrorists to an early meeting in paradise,” which were considered as possible ‘death threats’ to Muslims by some of the council members.
The statement passed reads:

The original draft referred directly to Pauly. The statement issued passed 4-1 with councilman Bill MacAloney voting against it.

After the vote was taken, Mayor Ulmer asked Pauly to apologize for her remarks. She refused.